Anger, injustice and politics brought people to the streets in Kazakhstan 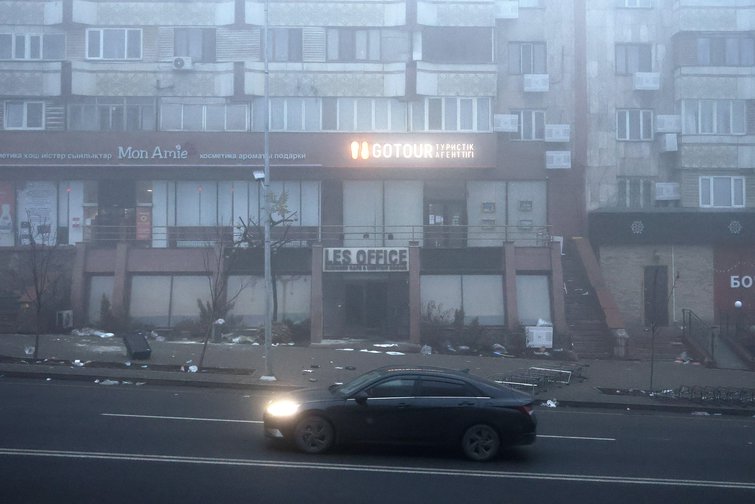 
On 8 January, people in Nur-Sultan, Kazakhstan’s capital, woke up with a slow but steady internet connection. Like their fellow countrymen, they had been sealed off from internet communications for almost three days, as the emergency in the Central Asian state worsened.

In the business capital, Almaty, violent clashes had set the city ablaze for three days and internet connection continued to be down. Only subscribers to certain mobile operators could be reached in other cities in Kazakhstan and abroad, keeping residents and observers in a frightening state of blackout broken only by gunshots and sirens.

After protests against growing fuel prices in the west of the country escalated into violence and looting across the country, what really happened in Kazakhstan since 2 January remains to be discovered.

openDemocracy reached Yevgeniy Zhovtis, a prominent human rights defender and director of the Kazakhstan International Bureau for Human Rights, in Almaty via telephone. He was able to offer a tentative explanation of the causes and developments during this past week – as well as some insights on what to expect next.

Popular discontent in Kazakhstan has been simmering for years. What finally provoked the fuel protests that sparked the nationwide demonstrations?

First, there was a protest regarding a price increase of liquefied petroleum gas (LPG), which was initially confined to western Kazakhstan, in the town of Zhanaozen. The government was unable to provide a satisfactory explanation, saying the pricing policy would now be regulated by market principles. Yet people knew that the fuel sector there is monopolised: lifting the government subsidies would simply mean more expensive fuel.

This initial protest of 2 January, which spelled out economic demands, was met by an attempt to negotiate on the part of the government, which sent a commission headed by the deputy prime minister to talk to people in Zhanaozen’s central square. The government wanted to avoid a repetition of the clashes that led to the shooting of unarmed striking oil workers there in 2011 and tried to prevent an escalation. It was, however, too late.

The next day the protest spread to nearby cities, sparking rallies of solidarity across the country. At this point, socio-economic demands were already being accompanied by more structured political demands for change.

Who joined the protests in solidarity across the country?

The groups behind the protest had different motivations and the protest changed course over time. Some of them rallied in support and solidarity of the original protests from Zhanaozen. Others took to the streets to voice the demands of unofficial opposition parties, such as [exile oligarch] Mukhtar Ablyazov’s Democratic Choice of Kazakhstan and [opposition journalist] Zhanbolat Mamai’s Democratic Party, alongside youth movements such as Oyan, Qazaqstan! and other less-organised groups and individuals. These protesters demanded political reform and the release of political prisoners.

In our work at the International Bureau for Human Rights, we monitor these protests and we can assess that the massive gatherings of 3 to 4 January were not organised by one particular group.

The trigger was rather the difficult socio-economic situation, the pandemic, and the ongoing restrictions to freedoms.

Until midday on 4 January, the protest was largely peaceful and pressure was mostly registered on the part of the police and security forces.

This made the situation tense, also given that the police, the ruling party, and the authorities in general have no legitimacy and don’t enjoy any trust from the population. Besides some government officials in the west of the country, local governors refrained from meeting with the people at the rallies.

We saw different styles and different kinds of people protesting, from angry residents to workers to looters. What can you tell us about the make-up of the protest?

By 5 January, there were probably four main groups of people on the streets of Almaty, where the protest took on a mass scale.

The first group was the peaceful citizens that had gathered the previous days across most urban centres in the country. A second group comprised the [opposition] political groups that tend to take part in these protests, which are generally promptly suppressed. A third group was composed of a large crowd of young people, mostly marginalised segments of the population that came into the city from the outskirts of the metropolis and from nearby villages. This generated a tension along rural-urban lines, and became evident in this group’s drive to loot the city. This group numbered in the thousands and [President Kassym-Jomart] Tokayev later called them “terrorists and bandits”, but that’s far from the truth. It was just a crowd, like those we have seen recently on the streets of the United States or France.

The last group, which by no means should be considered as unitary or organised, is the violent section, composed by Islamists and criminal elements infiltrated by loyalists to local elites. It is likely that Islamist groups were behind the burning of government buildings in the northern city of Aktobe, where Islamist cells historically exist. The involvement of these people, whose objective was to attack the police and steal weapons, was visible in the south as well, in the cities of Taraz, Shymkent and Almaty, where several criminal and violent groups possibly linked to the elites operated. The third and fourth group joined forces in certain instances, especially in Almaty, escalating the violence against the police, which responded with an iron fist .

The hypothesis that some of the violent elements originated from local elites could be a sign of an internal struggle for power?

We have seen political machinations in Kazakhstan for decades. This time it seems possible that some of the violent groups were close to the circles of former president Nursultan Nazarbayev, and probably acted from within the security service, the Committee for National Security (KNB), which we here used to call the Committee for Nazarbayev’s Security.

This is why one of the first and most decisive actions by Tokayev was to first dismiss and then announce the arrest of the head of the KNB, Karim Massimov, and then take the position of head of the National Security Council, previously held by Nazarbayev. In his initial speech to the nation, Tokayev spoke about an attempted coup, which he later amplified by publishing the accusation of high treason against Massimov, someone who has been very close to Nazarbayev historically. This would confirm the hypothesis that the enemy was within the state apparatus.

Of course, this is speculation, because it would be extremely difficult to verify what goes on behind the closed doors of the presidential palace. In any case, the situation is very complex. I believe at this time Tokayev might be trying to balance different elite groups.

In a speech on 7 January, Tokayev explicitly accused activists, foreign media and human rights defenders for having abused their rights to freedom of speech and having mis-handled the freedoms he had granted with a new 2020 law on peaceful assembly.

Since coming to power in 2019, Tokayev had been trying to build a “managed civil society”, something he could control through his channels. Yet, the fact that people are witnessing and living through social injustice led to a widespread distrust of these so-called reforms.

The people who have been carrying out the official policy of the ‘Listening State’ [the nickname for Tokayev’s liberalisation and modernisation policy announced in 2019] have done so in a Soviet manner, top-down, through manipulation, and by controlling the media. I believe that part of the presidential speech was written by Dauren Abayev, former minister of information and now deputy head of the presidential administration. Human rights defenders and NGOs never enjoyed his favour and were always targeted. In addition, I believe that Russian political technologists assisted in drafting the speech, given the lexicon that Tokayev uses.

I believe the authorities will continue to try to control civil society, but it is still unclear how. For now, they have arrested several journalists, civic activists, and trade unionists, but charged them with administrative fines, in line with the previous policy of repression.

It is unclear whether the government plans to further restrict the already small space for freedom of expression. Several international human rights watchdogs are now campaigning to make sure the repression doesn’t worsen in Kazakhstan.