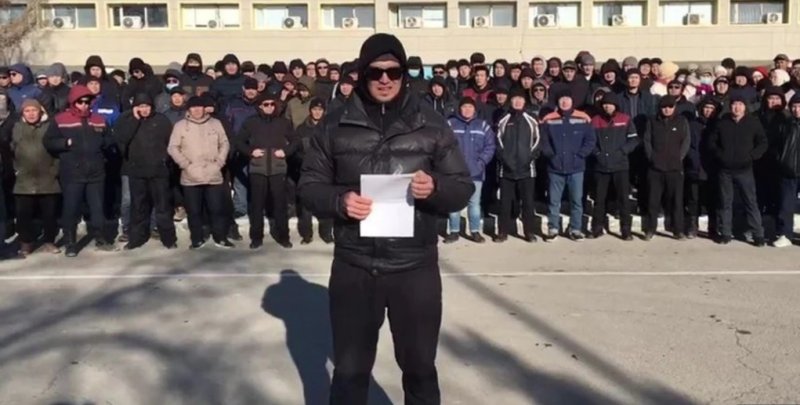 ZHANAOZEN, Kazakhstan -- Hundreds of residents of Kazakhstan’s restive town of Zhanaozen have rallied for several days to demand jobs after deadly anti-government protests that shook the country last month

The protesters gathered in front of the town’s administration on February 7, the sixth day of their rallies, saying that 2,500 men and women demand jobs in the local oil industry from the local and central government.

Zhanaozen Mayor Maqsat Ibagharov met with the protesters and offered to create a commission that will look into their demands.

But the protesters rejected the offer and demanded that Ibagharov, President Qasym-Zhomart Toqaev, and Manghystau Governor Nurlan Noghaev meet their demands "right away."

Zhanaozen has been the epicenter of protests in the tightly controlled former Soviet republic for years.

After the deadly protests last month, Toqaev announced his slogan "Let's Build A New Kazakhstan Together!" and promised democratic reforms in the country, replacing officials on different levels across the nation.


However, on February 5, hundreds rallied in the country's largest city, Almaty, protesting Toqaev’s decision to appoint Erbolat Dosaev as the city's new mayor and demanding the Kazakh president's resignation.

Kazakhstan's Committee of National Security (KNB) said on February 7 that a former deputy chairman of the KNB, Daulet Erghozhin, was sent to pretrial detention over the January violence.

The KNB said earlier that its former chairman, Karim Masimov, known as a close associate of former President Nursultan Nazarbaev, as well as one of his deputies, Anuar Sadyqulov, were ordered to stay in pretrial detention on high treason charges.

"The criminal case has been classified as top secret," the KNB's February 7 statement said.

Protests in Zhanaozen last month over a sudden fuel price hike spread across Kazakhstan and led to violent clashes in Almaty and elsewhere.

Much of their anger appeared directed at Nazarbaev, who ruled Kazakhstan from 1989 to March 2019, when he handed power to Toqaev. However, Nazarbaev was widely believed to remain in control behind the scenes.

The protests were violently dispersed by police and military personnel, including troops from the Russia-led Collective Security Treaty Organization, which Toqaev invited to come in, claiming that "20,000 extremists who were trained in terrorist camps abroad" had attacked Almaty.

The authorities have provided no evidence proving Toqaev’s claim about foreign terrorists.

Kazakh officials said 227 people, including 19 law enforcement officers, were killed during the unrest across the country.

Human rights groups insist that the number may be much higher as scores of people remain missing, presenting proof that many peaceful demonstrators and people who had nothing to do with the protests were killed by police and military personnel following Toqaev's "shoot-to-kill-without-warning" order.