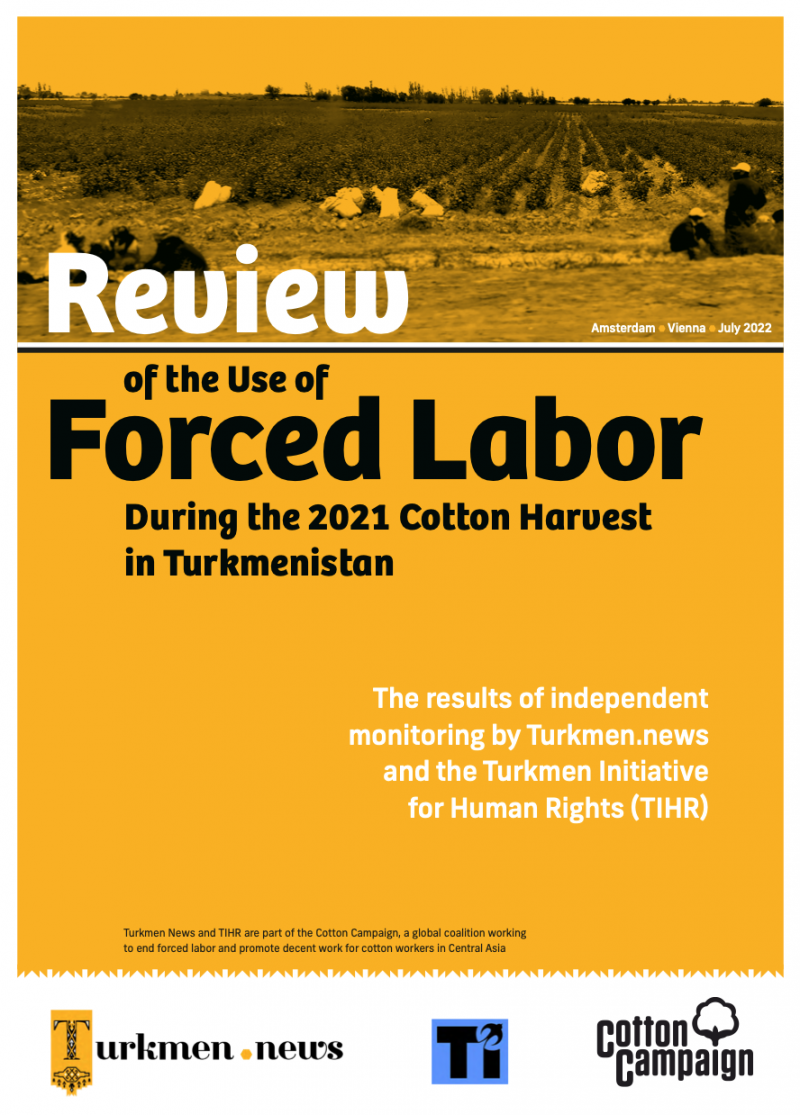 “In 2021, Turkmenistan has once again used systematic, state-imposed forced labor to harvest cotton”, said Allison Gill, Forced Labor Program Director at Global Labor Justice-International Labor Rights Forum (GLJ-ILRF), which hosts the Cotton Campaign. “Despite this, research reveals that Turkmen cotton enters the global markets, including the EU and U.S.. Brands and governments must implement robust mechanisms to eliminate forced labor from supply chains and end their complicity in the forced labor system in Turkmenistan.”

Governments must adopt and robustly enforce import control measures against forced labor products. To effectively address the state-imposed forced labor system in the harvest of Turkmen cotton, these control mechanisms should allow for a regional scope that ensures all goods, made wholly or partially with Turkmen cotton are banned.

The report, Review of the Use of Forced Labor During the 2021 Cotton Harvest in Turkmenistan, by Turkmen.news and the Turkmen Initiative for Human Rights, both members of the Cotton Campaign coalition, is based on first-hand evidence of forced labor in the cotton harvest documented by trained civil society monitors and local sources. In authoritarian Turkmenistan, where the government has taken harsh action against human rights activists and civil society organisations that are critical of the repressive regime must work from exile, forced labor monitors conducted this work with great risk for arrest and torture. The report covers four of Turkmenistan’s five regions — Balkan, Dashoguz, Lebap, and Mary. The findings show that forced labor of public sector employees in the 2021 harvest was widespread and systematic. Independent monitors also recorded cases of child labor, with children working in the fields along with their parents or as replacement workers for parents forced to pick cotton or pay a replacement picker.

“The government-orchestrated forced labor system in Turkmenistan has a downward spiral effect on Turkmen people, who are already facing a deep economic crisis”, said Ruslan Myatiev, director of Turkmen News. “Child labor is a direct result of the government’s policies, with children often being sent to the fields as replacement workers for state employees or to help their families pick cotton.”

The  government of Turkmenistan, one of the most repressive in the world, forces farmers to meet official production quotas under threat of penalty including loss of their land. In 2021, extreme drought conditions in combination with a poor management and distribution of seeds, fertilizers, and equipment by the government, resulted into low yields. Independent monitors recorded cases of farmers being fined or having their land confiscated, as a result of not being able to meet the cotton quotas imposed by the state.

“The Turkmen government has total control of the cotton production system, which relies on exploitation of farmers and forced labor of Turkmen citizens”, said Farid Tukhbatullin, Chairperson of Turkmen Initiative for Human Rights. ”Anyone who attempts to speak out risks harassment and losing their job, as there are no independent institutions or mechanisms to protect people against reprisal.”

The findings of the 2021 harvest monitoring are consistent with findings from previous years and underscore the government of Turkmenistan’s failure to address the issue of forced labor.

The report launched today sheds light on the trade flows that allow forced labor Turkmen cotton to enter global supply chains through two main streams: i) as finished goods produced in Turkmenistan and exported through direct trade routes or transshipped to, for example, Kazakhstan, Russia, Belarus, Italy, the U.S., and Canada, and ii) through suppliers in countries that produce textiles using Turkmen cotton, yarn and fabric, in particular Turkey, but also China, Pakistan, and Portugal, among others.

The Cotton Campaign called on governments to adopt and robustly enforce effective border control mechanisms to ban imports of forced labor products. Although the U.S. has had an import ban on all cotton products from Turkmenistan in place since 2018, information on enforcement is scant and cotton products from Turkmenistan continue to be sold to U.S. consumers. The EU has committed to adopting new measures to combat forced labor. The Cotton Campaign has called on the EU to include a border mechanism to prevent goods tainted with forced labor from entering the world’s largest common market. Turkmen cotton reaches European consumers as finished goods produced outside the EU and exported to the EU—in particular goods made in Turkey, with Turkey being the largest manufacturer of cotton products  using yarn and fabric originating in Turkmenistan and the third-largest supplier of textiles to the EU—or through direct trade routes, with Turkmenistan exporting cotton, yarn, and fabric to countries like Portugal, for production of finished goods.

“In Turkmenistan, just as in the Xinjiang Uygur Autonomous Region (XUAR), companies cannot prevent or remediate forced labor”, said Raluca Dumitrescu, Coordinator of the Cotton Campaign. “For this reason, brands and retailers must establish a legally-binding policy that prohibits the use of cotton from Turkmenistan and prohibits business with companies that use it, and require all spinning and fabric mills in their supply chains to implement the same policy”.

The Cotton Campaign also called on companies to sign the Turkmen Cotton Pledge, to work to ensure that cotton from Turkmenistan produced with forced labor does not enter their supply chains. To date, 140 major apparel and home goods brands and industry associations have signed the pledge. Consistent action by companies, civil society, and government, played a critical role in pressuring the government of Uzbekistan to end the forced labor system there. Similar engagement is urgently needed on Turkmenistan.

The Russian version of the report can be downloaded here.